The annual Commercial Vehicle Show was held at the NEC Birmingham between 25th and 27th April 2017 with Arnold Clark Vehicle Management in attendance for the first time. 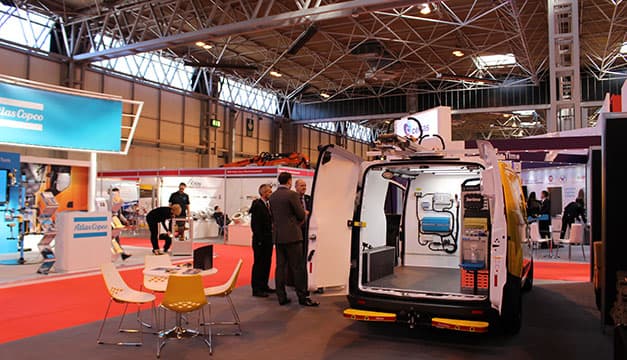 This was a bumper year for Britain’s biggest road transport and vehicle event with more than 21,000 attendees over the three days. The show features exhibitors from across the spectrum of the commercial vehicle sector including truck manufacturers, tyre companies, fuel suppliers, insurers, telematics and training providers.

Representatives from ACVM alongside colleagues from Arnold Clark Insurance Services and Arnold Clark Rental populated the Arnold Clark Group stand. This highlighted the Group’s ability to deliver total vehicle solutions, helping to provide businesses with a strong range of options in order to meet their business needs. To mark the occasion, we launched a new section on our website highlighting our full service approach to light commercial vehicles.

A masterclass in coachbuilding

Arnold Clark’s versatility was on show, with Arnold Clark’s Coachbuilders demonstrating their skills with a highly customised vehicle on display. The van was converted with a Ring Genisys control system to manage the devices fitted to the van including strobes, beacons and load-management systems. For added driver comfort, it was also fitted with auxiliary heaters, steps with built-in reversing sensors, a towel roll and DEB skincare. For all around safety, the van also included a dash cam, parking sensors and a reversing camera.

The CV show proved to be the perfect platform for new product launches. DAF revealed their new generation of CF and XF trucks which offer greater fuel efficiency, and improved driver comforts. Isuzu also unveiled the 2017 D-Max and the latest version of the pickup attracted loads of attention with its 1.9-litre engine producing 164bhp along with the impressive 125,000-mile warranty.

The van remains the cornerstone of commercial vehicles and there were some new models on display. The all-new Volkswagen Crafter made its UK debut at the show. This provides all the loading you’d expect from a large van along with vital safety features including lane keep assist, trailer assist and adaptive cruise control. The MAN TGE is the first van from the truck manufacturer, and they’re working with Volkswagen to produce this new line. Although they are entering a highly competitive segment, MAN hope to attract customers with their outstanding aftersales service.

There was a range of standout displays across the show. Ford has one the largest displays showcasing the Transit and Transit Custom ranges and showed off their new automatic transmission and intelligent four-wheel drive systems. They also announced an expanded trial for their electric Transit, which could prove to be a big game changer for commercial fleets. It perhaps helped that their stand incorporated a café where passers-by could grab a coffee and some sweet treats.

The crowds all gathered at the shared stand of the Road Haulage Association and Goodyear Dunlop to get a chance to play their racing bug game proving the value of being creative with displays.

The dedicated Workshop and Cool Zones also proved popular. Within the Workshop Zone in Hall 4 there was a huge range of components on display showing all the latest technology available to keep vehicles running smoothly. The Cool Zone was home to a range of refrigerated vehicles and bodywork along with the cold chain operations monitoring equipment.

It was a fascinating insight into the wider world of commercial vehicles and ACVM look forward to learning more and sharing their knowledge at next year’s show.