Throughout the month of August there have been a number of groundbreaking developments for the low-emission vehicle industry. The following innovations may have substantial long-term effects on fleet management during an era of alternative fuel adoption. 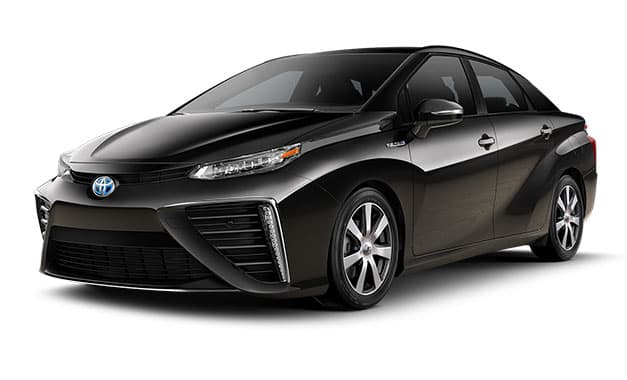 The first fuel cell vehicles have arrived at an import centre at Portbury, Somerset, in the form of the Toyota Mirai.

The Mirai will launch in September as part of Toyota’s global introduction of the first ever mass-produced fuel cell saloon. The cars are being drip-fed into Europe as the infrastructure is still being developed.

To operate the Mirai, drivers fill reinforced carbon-fibre fuel tanks with compressed hydrogen at fuelling stations in a similar manner to current fuel pumps. Outside air taken in through the adapted front grill reacts with the hydrogen, creating electricity to power the vehicle. The only by-product of the reaction is pure water vapour, which is emitted through a tailpipe. In nearly every way, the driving experience is unchanged compared to conventionally powered vehicles.

Toyota hope that the Mirai will be a turning point in alternative fuel vehicles and with the introduction of this first limited import, the company aim to build awareness, understanding and acceptance of fuel cell technology.

A new report entitled ‘Uptake of Low Emission Vehicles in the UK’ has been released by the UK Government. The report contests popular myths about owning ultra-low-emission vehicles against research conducted by a team at the University of West of England about the current use and impact of ULEVs.

The report seeks to encourage the growth of the ULEV market in the UK and offers direction for the future of research related to low emission vehicles. The Government has stated that they aspire for every new car in the UK to be a ULEV by 2040 and intend to promote this through a range of measures including financial support.

It has been revealed that the UK ULEV market has undergone significant expansion. In the last quarter of 2014 and the first quarter of 2015 ULEVs represented over 1% of new car sales for the first time, a similar percentage to those in the US, France and Germany.

Typical current private ULEV owners are middle-aged, male, well-educated, affluent and crucially, live in a household with the ability to charge at home. This demographic is unlikely to see much change over the next five years. Unexpectedly, ULEVs are often being used as ‘main cars’ even for long-distance journeys and the majority of private owners are extremely satisfied with their purchase.

As of now, electric cars are far more likely to be utilised by fleet owners in the private sector with fewer than 500 employees than in the larger public sector. The growth of ULEVs for future fleet owners is uncertain but many organisations appear to have tested them in order to assess suitability so it is very possible ULEV fleet numbers will start to rise.

The government will invest £500 million in ULEVs over the next five years to continue growing the market. They will attempt to meet the massive desire to see increased public charging coverage as range concerns are the number one barrier to adoption of electric vehicles.

With the announcement of £500 million worth of funding for investment in alternative energy vehicles, Highways England has confirmed that off-road trials will test the potential of wireless charging on electric vehicles. This comes after a study looked at the feasibility of this innovative technology.

Wireless technology would be installed underneath specially designated charging motorway lanes and power would be transferred to electric vehicles in motion without the need to stop. Wireless charging would be implemented alongside the Government’s commitment to create a network of charging points every 20 miles on the motorway network.

The trial was announced after the Transport Minister, Andrew Jones, opened the first rapid plug-in charge point in Cornwall last week. The region is the first in the UK to benefit from this technology, with 16 charge points being installed in Devon and Cornwall throughout summer. The Minister said he was committed to investing in transport infrastructure and the new rapid charge point network is part of a long-term economic plan to encourage the use of electric cars.

In an attempt to increase low emission vehicles sales, purchases can now be funded by a loan of up to £50,000 for private buyers, or £100,000 for businesses. The negotiable loan can be used to pay for the entire cost if desired with a maximum repayment period of six years.

Climate change targets and long-term savings have helped motivate the grant from Transport Scotland and the government has pledged to ease integration with other initiatives including a supported infrastructure of free-to-access rapid charging points.