AdBlue is appearing in more and more vehicles 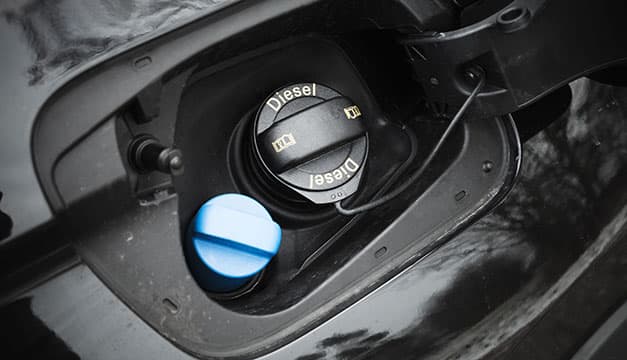 For the past few years, AdBlue has been used by manufacturers to reduce emissions from diesel engines.

AdBlue is becoming even more common and since 2006, industrial vehicles above 7.5 tonnes (including buses) have been manufactured with AdBlue tanks built in.

This is to comply with the Euro 6 standard, which aims to reduce harmful emissions from cars and vans.

However, if you haven’t driven an AdBlue-equipped vehicle, you might not know exactly how it works, so we’ve put together a handy guide.

What exactly is AdBlue?

AdBlue is a non-hazardous, non-toxic engine additive that comes in the form of a clear liquid. Its official (not very catchy) name is AUS32 (Aqueous Urea Solution 32.5%) and it also consists of 67.5% deionised water.

AdBlue is stored in a separate tank in the vehicle, typically with its own sensor and gauge. This could be right next to the fuel tank so it’s obvious when you’re filling up, or the AdBlue filler can be in the engine compartment itself.

How does it work?

To reduce emissions, AdBlue is sprayed into the exhaust stream using a post combustion process. It never comes into contact with the diesel itself. Water vapour, nitrogen and carbon dioxide are released from the exhaust.

How long does AdBlue last?

According to GreenChem, a typical mid-sized diesel car will travel 1,000km (620 miles or so) on a single litre of AdBlue. Most AdBlue tanks hold around 10 litres or more, so you may find it won’t need to be topped up until the next scheduled service.

However, it all depends on the number of miles driven, driving style, and vehicle load. For commercial vehicles, the payload is another factor to consider.

If you ever need to top-up AdBlue between services, the car will alert you in plenty of time by messages on the dashboard. Either it will tell you how far you can travel before a top-up is required, or how many times you can re-start the car, so it's important to check your handbook. Be warned, if you don’t top up AdBlue before it is completely empty, your car will not start.

Where can you buy AdBlue?

If you need to top up in between services you can buy AdBlue from your local dealer, fuel company websites, Halfords and on Amazon. It normally costs about £1.50 per litre.

Topping up AdBlue is quite straightforward. In most cases, you open the AdBlue filler cap, screw on the connecter of the refill bottle and allow the AdBlue to drain into the tank – but again we recommend that you check your vehicle handbook first.