The next generation of car tech is unveiled at CES 2018 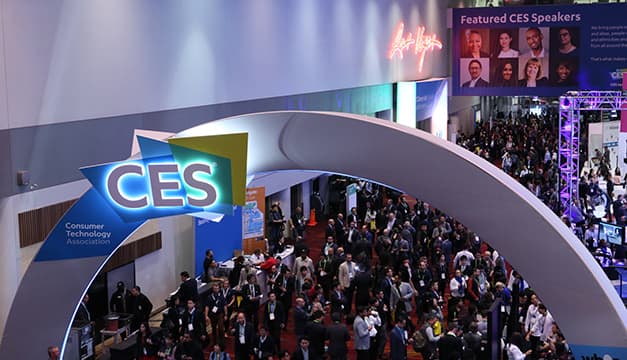 The 2018 Consumer Electronics Show (CES) took place in Las Vegas earlier this month and a number of brands were there to reveal what they hope will be the next innovation in automotive. From new concepts to the latest in-car gadgets, there was an amazing array of technology on show that could change the way we think about driving.

Drive with your brain

Nissan revealed their brain to vehicle technology (B2V) which reads drivers’ brainwaves, helping the car anticipate what the driver is going to do before they do it. The driver wears a headset and the technology interprets brainwaves that repeat themselves in a given situation. This system is not designed to work with self-driving cars but rather as an aid to the driver, setting the car up for the next manoeuvre without taking active control of the car.

You’ve probably become used to talking to Alexa, Siri and Google on your phone or even in your home, but now your handy virtual assistant is going to follow you into your car. Mercedes-Benz is developing its own assistant, known as Mercedes-Benz User Experience (or MBUX, if that helps). Other manufacturers plan to work with existing systems, with Toyota announcing integration with Amazon’s Alexa and Kia set to incorporate Google Assistant into their 2018 models. The new systems should make driving safer, with infotainment controlled by voice, allowing the driver to always keep their eyes on the road.

Have you ever wondered what it would be like if the shops came to you? Well, wonder no more (unless you grew up before the 21st century when delivery vans and mobile shops were far more common) because Toyota has unveiled what they’re calling an ‘on-demand retail experience’. It’s a self-driving van that stops where customers demand. Some might think that’s not necessary given the convenience of buying online, but imagine if the van was filled with shoes? You could try them on. But it doesn’t have to be shoes. It could be scarves or hats, or even food. Big retailers and restaurant chains have already signed up for this tech so expect it to hit the streets before the 2020s. If the technology is successful, it will revolutionise the way fleets deliver.

The way that we buy cars is changing. If you go into the showroom, they might not have the model you want and that means that you can’t make a fully informed decision. BMW don’t want to miss out on any prospective buyers, so they’ve teamed up with HTC Vive to let customers explore their car in virtual reality. Visitor’s to CES could experience the new X2 virtually and use the Vive Wand to open the doors, look in the glove box and even fold down the seats. You can even change the colour and customise within the simulation. This technology will be coming to showrooms this year and could change the way we buy cars forever.