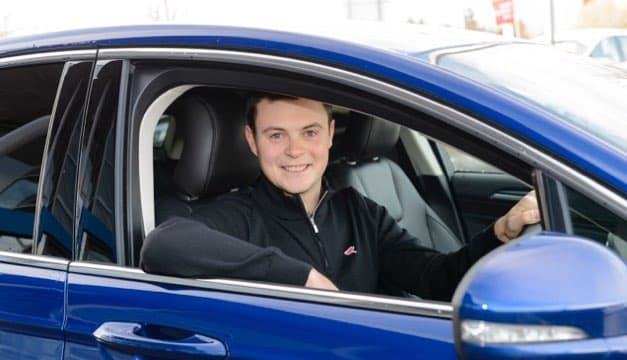 Arnold Clark is proud to sponsor Ayrshire golfer Jack McDonald, who turned professional in March 2016. Jack, 23, took his first swing when he was just 4 years old and was a member of Annanhill Golf Club by the time he was 9. Golf runs in the family and his grandfather, Gordon Cosh, played in the Walker Cup in 1965. Following a stellar amateur career, Jack followed in his footsteps 50 years later, helping Great Britain and Ireland lift the trophy at Royal Lytham & St Annes.

With spring just around the corner, it’s almost time to get back onto the fairways. With that in mind, when Jack visited the ACVM office at Hillington, we couldn’t wait to ask him some of his top golfing tips.

What advice would you give to amateur golfers?

Revert to the basics – swing, alignment, ball position and grip. Getting the basics is key, as there are no quick fixes. That’s why getting these four things right is so important. Don’t overthink it.

Think about the shot you’re hitting and what sort of movement is involved. There’s not a certain swing; it’s about learning what works for you.

Try and avoid big breaks and long periods when you don’t play, as this is when you can forget get the basics. Play regularly during the winter and improve during the summer.

What’s the best way to improve?

If you are a member of a club then playing in medals is a great way to improve – they give you motivation. Also knowing what you can and can’t do is key to being able to make these improvements.

Do you have a favourite club you couldn’t play without?

My driver is my key club. However, my favourite club is my putter, which is a Titleist, Scotty Cameron Newport. I’ve had this club for about 6 years whereas I change my irons and wedges once a year as they start to wear out.

What’s the best advice you were ever given?

The best advice I was ever given was about not focusing too much on the technical aspect, but to focus on enjoying myself and enjoying the game. I’ve often been told if you are able to enjoy your job, then you’ll be able to do it better.

Golf is a very sociable game and this is what’s great about it – you can chat away as you go round the course unlike if you’re playing tennis or football. It’s when you’re in contention on the back 9 holes of a tournament when things get tense, but in general it a very friendly sport.

Thank you to Jack for taking the time to speak to us. With that helpful advice, there’s still plenty of time to improve before this summer’s annual ACVM golf day.